The breaststroke is a short axis swim stroke, much like the butterfly, in many ways. Short axis pulsing is the fundamental movement of the core muscles used in both strokes, were you to eliminate the arm strokes and leg kicking. Theoretically, the breaststroke can be mastered, once you have mastered the core muscle pulsing technique. You might think of the large core body muscles as an engine that generates power through a rhythmic and fluid pulsing action and the legs and arms are connected, to move the body forward quicker.

When learning the breaststroke, there is still a propulsive phase and a recovery phase, as there is with other swimming strokes. Sometimes, it might be referred to as a pull, push and recovery technique, since forceful movement and contractions fight the body’s resistance to the water. Essentially, the breaststroke includes outer sweeping motions to “move the water” from in front of the body, to lower resistance. The arms clear a path from the chest area and the kicks also include out-sweeping and in-sweeping motions. It is an original open water swimming stroke. 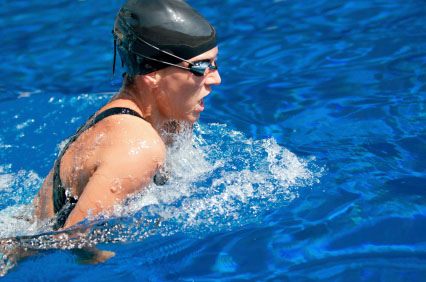 Breaststroke is a Short Axis Stroke

As a short axis swim stroke, there is not a body rotation involved with the breaststroke, (or the butterfly), unlike the long axis swim strokes of the freestyle, front crawl or backstroke. Instead the arms and legs move in unison and not in a reciprocating fashion. The contractions and short axis pulsing of the large core muscle group brings the head and shoulders of the swimmer, out of the water.

In the breaststroke, all of the major muscle groups are used, but in a different synchrony than found with a long axis swim stroke that includes core rotation. The clavicular portion of the pectoralis major and the latissimus dorsi are responsible for beginning the pull into the midline of the body. The force generated during the out-sweeping movement results in forward motion and lifting of the head and shoulders out of the water, for the recovery phase. Shoulder blade stabilizing muscles support the force generated by the arms and the core-stabilizing musculature links the upper and lower extremities, to utilize the short axis pulsing of the abdominal core muscle group. Kicking is accomplished with the feet hip-width apart and the knees and hips, in a flexed position. As the hips and knees are extended, the outer sweeping motion occurs, with the feet turned outwards.

The gluteal muscles and hamstrings are utilized in the breaststroke, while the quadriceps and rectus femoris function to turn the outward sweep into an inward sweep. As the legs are brought back together through the use of the adductor muscles, the calf muscles bring the foot and ankle into a pointed position. The rectus femoris and iliopsoas flex the hip and trigger the hamstrings to flex the knee.

If the breaststroke sounds a little difficult, it’s easiest to learn this short axis swim stroke through short axis pulsing. Before adding the inward and outward sweeping of the arms and legs, learning how to utilize this pulsing of the body is crucial. Some may compare it to a natural swimmer motion, where you slip forward “out from under” the water over your back and then, slide forward and down, “over the water” under your chest.

While this isn’t a dolphin kick, it may be practiced by pressing the chest towards the bottom, then pressing the hips, in an alternating motion. This moves the water, using your large core muscles and once you have mastered short axis pulsing, you can add your legs and feet and finally, your arms. Mastering this short axis swim stroke is dependent on mastering the pulsing of the core muscles, but the breaststroke can be one of the easier swimming strokes to master, with enough practice.

Total: 3200 meters or yards depending on length of pool

back to the top of the breaststroke page 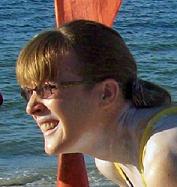