The ocean is a vast place of wonder and marvel, and the ocean deeps contain many hidden wonders that only marine biologists and deep sea explorers will ever be able to see. There is much that mankind can learn from the creatures of the deep sea, and you will find that the wonders of the deep are as varied as they are beautiful. 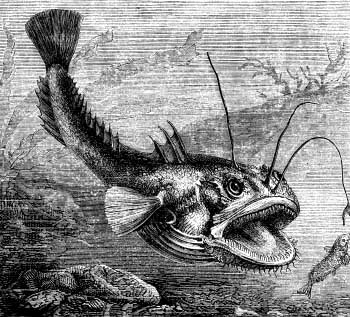 Layers of the Deep Sea

The deep sea or ocean is divided into three zones:

1. The Mesopelagic Zone is the first layer of the deep sea, and this is the zone where sea life first begins to show bioluminescence. There is still light above this zone, but the darkness below is intense. Many of the animals that live in this zone and those below tend to come up to the photic zone above to feed, as food so far down tends to be scarce. Animals in this zone tend to have expandable stomachs and jaws, as well as long teeth that are razor sharp.

2. The Bathypelagic Zone is the depths of the ocean between 1 kilometer and 4 kilometers down. There is no light aside from the bioluminescence of the animals themselves, and there is little food this deep down. Many creatures are able to live here despite the tremendous pressure, and most of these creatures have black or red coloring. The color of the ocean is a deep blue, thanks to the fact that little light penetrates this far down.

3. The Abyssopelagic Zone is named after the Greek conception that the ocean was bottomless, and is the entire ocean lower than 4 kilometers down. The pressure of this zone is crushing, and the temperatures are near freezing.

Most of the fish that live in the deep ocean have body structures or features that enable them to survive the terrible cold and pressures of the depths. Most of these ocean life creatures who live down in the depths are thought to be evolved creatures of shallow water marine animals, as there are many creatures that resemble their shallow water counterparts, but with much different body structures. Food is scarce in the ocean deeps, and the bioluminescence of the marine creatures help to attract food, as well as to stay together, attract mates, and for protection.

There have been a number of amazing discoveries regarding life in the deep sea:

• Giant volcanoes on the ocean floor have been found near Antarctica, some the size of Mt Fuji in Japan.

• Microbes living in mussels inhabiting hydrothermal vents are believed to be processing hydrogen gas for their food.

• A species of animals known as Loricifera were discovered 3,500 meters below the surface, and are able to survive without oxygen for long periods of time or even indefinitely.

• A giant oarfish 11 feet long known to live in the deep sea was found dead close to the shorelines of Sweden. This fish hadn't been seen since 1879until this past summer, 2013 .

• A new type of worm known as the Squiworm was seen at 2.8 kilometers under the ocean's surface.

These are just a few of the amazing things discovered in the last year or so.

What is Deep Ocean?

Deep sea, or deep ocean, is the name given to the layer of the ocean that is 1,800 meters or more below the ocean's surface. The Mariana Trench is considered the deepest part of the ocean, and it lies 35,798 feet below the surface. Despite common beliefs to the opposite, marine life capable of living this far down does, in fact, exist.

back to the top of deep sea page