The Ocean Floor is Ever Evolving

The ocean floor makeup the floor and walls of the most giant natural swimming pool of Earth.  Those eye-catching aqua oceans that we natural swimmers love to swim our open water swims in and frolic with our families in have an ever evolving deep ocean.  The ancient ocean of yesteryear had all the same components of what we find today, but the underwater landscape has changed from its ancient times.   Although we really only swim on and near the ocean water surface, knowing what is beneath you can make your salted, aquatic race more enjoyable.

The ocean floor is covered in five types of sediment.  Each found at different layers of the salty water seafloor.  There is the terrigenous deposit.  This is the mud and sand washed off the land masses.  Another sediment is the red clay.  Red clay originates from the volcanoes.  The calcareous ooze is made of chalky planktonic shells, and the radiolarian and diatom ooze is made up of tiny skeletons. 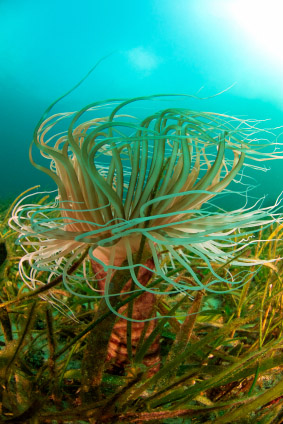 The continental rise is a gentle slope ending at the seafloor.  Here we arrive at one-third of what makes up the entire ocean – the abyssal plains.  It is made of layers of sediment that cover uneven rock of tectonic plates.  Here you encounter hills of parallel ridges, seamounts and guyots (types of underwater volcanoes), steep-sided submarine mountains that end with ocean trenches.  There are rows of volcanic islands called island arcs.

The deep seas of these ocean floors are formed between the continents of the Earth.  These continents move over thousands of years in time.  In fact, scientist Alfred Wegener suggested that the land masses were once all one piece which fragmented, drifted apart thus making the oceans of today.

Even under all that water, the Earth’s outer level is made of mobile plate that float on a hot, dense layer of rock called the mantle.  This jigsaw of tectonic plates forms the ocean floors and carries the continents by jostling and colliding.  Most active volcanoes and earthquakes happen where the plates meet.  What does all this jostling looks like?  The molten crust rises at the tectonic plate ridges, spreads, cools, hardens and then a new crust creeps outward from the ridge.  Then there is subduction in which the opposite occurs:  the crust is cold and dense and sinks into the mantle.

The molten rock under the Earth’s surface is called Magma.  When it cools it makes igneous rock.  When it is hot and escapes through the cracks it is called lava.  Stripes are formed in the Earth surface which can tell us where the seafloor has spread away from where it first formed.  Many times this new rock is aligned with the Earth’s magnetic field.

Currently, the Atlantic Ocean is growing and the Pacific Ocean is shrinking as the American continental plates override its eastern rim.  So those open water swims may not feel any different while swimming on the water surface, but the shape of the ocean will look different from the moon.

back to the top of ocean floor page