Ocean Life consists of a wide assortment of animals that live in the ocean, including mammals (bottlenose dolphins, blue whales), reptiles, amphibians, fishes such as goatfish and garfish, sea turtles, deep sea fish and invertebrates. All of these animals that live in the ocean and the coral reef animals swim naturally and around the most magnificent coral reef colors, and they are the animals that have the most energy for swimming - all the way down to their skin. Even crocodiles , and their freshwater/brackish water counterparts, the alligator. Some, like the salpa maggiore, even glide by sucking in water and shooting it out their rear and others like the blue swimmer crab use their own set of paddles. There are those that walk the ocean floors like the epaulette sharks and the many species of frogfish. They are designed to have the energy to swim with much less effort than humans, which results in their being able to swim much longer. Missy Franklin is one of the few humans who could fall into this natural class of swimmers. These ocean life swimmers eat precisely the right amount to provide them with sufficient energy to swim for long distances, but you will be hard pressed to find an overweight ocean creature. If we want to improve our ability to swim naturally, we should definitely take the time to study these animals, the style of their swimming strokes, their nutritionals habits, their , their currents of life and the chi energies (y'chi makes it effortless and graceful) that they tap into in order to swim efficiently. 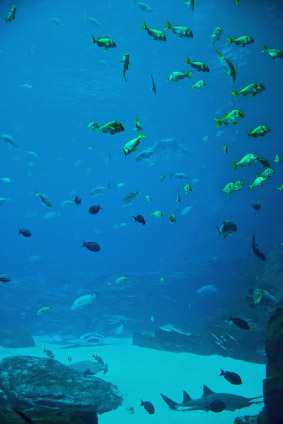 Nektonic animals are those that have fins and swim through the water. The majority of the marine species that we are familiar with are nektonic, including seals, octopuses (which are finless with eight legs), whales like blue whales, lazy carpet sharks like the spotted wobbegong and fish such as lionfish. These creatures are born with the perfect streamlined shape to slice through the water, and their bodies are adapted perfectly to swim, dive, and glide through the water nearly effortlessly. Swimming techniques and drills are inspired by such animals as the whale and the dolphin porpoising through the water which inspires the butterfly stroke or the finless octopuses which inspire breaststroke. They have no need of swim caps to keep hair out of their eyes or make them more streamline and water resistant.

Benthic animals are those that walk or crawl, as well as burrowing into the sediment on the ocean floor. They also cling to coral reefs and rocks, or they simply move around on seabeds. Oysters, anemones, snails, sea cucumbers, halibut, and sole are a few of the benthic ocean animals. There are two subdivisions of benthic animals: deep sea and shallow water benthos.

There are also sea creatures that float in the tides and drift in the ocean currents. Many times they are also able to swim by pulling and sucking and pushing out water, and they look much like breaststrokers. Besides the salpa maggiore spoken of previously, there are the fascinating jellyfish.

Sea creatures are made to thrive in the depths of the ocean, with their anatomy and chi energy being perfect for cutting through the water and it's currents, not having to deal with wind speeds:

• Their eyes are placed on the sides of their head, which enables them to cut through the water at high speeds with their eyes open without harming their eyes.

• Their bodies are balanced perfectly with just the right amount of skin oils and fur or scales to live in the water. Humans need to take special care of their skin in and out of the water.

• Their fins help to propel them easily through the water.

• Their body movements are economical and conserve energy, and yet they speed through the water at amazing speeds.

• The color of their bodies helps them to blend in easily to their surroundings.

Even seahorses who swim vertically are most natural swimmers.

You can become a Natural Swimmer

Humans and other land creatures are poorly equipped to glide through the water with the greatest of ease:

• Our eyes are on the front of our heads, and they hurt when we go through the water at high speeds with our eyes open.

• It takes work for us to balance in the water, and we have to keep our heads down and turned to the side in order to have a proper equilibrium underwater.

• The natural tendency of human swimmers is to hold up our heads and dog paddle, which is the least efficient type of swimming stroke that will tire us out.

As you can see, ocean creatures are made to thrive in the water, and we can learn from them.

A unique suggestion was posed in 1966 by Walter Munk, an oceanographer and a pioneer. His theory was that all of the marine ocean life swimmers, from animals as large as whales to the size of tiny krill, all contribute a good deal of the mechanical energy required for ocean mixing.

His suggestion was simple: Take the mechanical energy of every single marine swimmer, add them up, and the total is a number that could account for up to one third of the ocean mixing.

This means that a good deal of the motion in the water, both vertical and horizontal mixing, is caused by the variety of marine swimmers. While a single marine swimmer the size of a krill will not cause much of a difference, adding all of the marine swimmers and their motion together can account for a significant portion of the ocean mixing that occurs on a daily basis. There are a number of factors that are yet to be accounted for, such as schooling, wakes, viscosity, boundary layers, and more. However, despite oceanographers being divided on the subject, it remains an interesting model that will yield fascinating results in recent years. Hopefully, non of this has to do with the disappearance of starfish.

back to the top of ocean life page