In the ocean, the lionfish is a natural swimmer that many divers will try to avoid. While visually stunning, this venomous species can bite and cause a great deal of pain. Despite their dangers though, those on land do find them to be the perfect addition to their saltwater aquarium.

As with most fish, the lion fish glides through the water with its tail and fins. By sweeping its tail back and forth, it can gain momentum to help it glide through the water. At the same time, it will flex its body, while stretching and expanding the muscles on a single side. This helps it to cut through the water with ease. No matter if you see this natural swimmer in the ocean or an aquarium, there is no denying how incredibly majestic it looks. 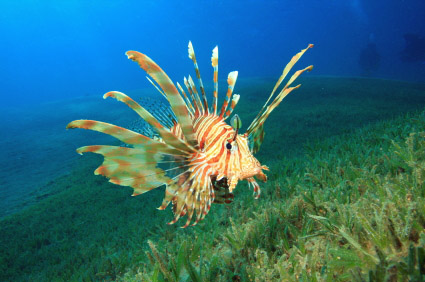 The lionfish belongs to the scorpionfish family, which contains six genera and 22 different species. Their inclusion in this family is due to specific characteristics that they share with other fish in the same family. They include:

A known invasive species, these natural swimmers are now appearing in other parts of the world, thanks to the increase in demand for them. As exotic trade imports these fish and owners release them back into the wild, they can quickly take over an ecosystem. This is due in large part to their dangerous venom.

While a human that is stung by the fish may only end up with severe pain it is also possible to experience shortness of breath, numbness, delirium, nausea and even death in some cases. Smaller animals and ocean life who are stung will typically be impacted more by the by the sting.

Despite the ability to sting, this natural swimmer doesn’t tend to go after other fish. Instead, its preferred food source is crustaceans that can be found in the water. In captivity, the most appropriate diet for these fish is ghost shrimp, fiddler crabs and crawfish. Its prey can be attacked in a matter of seconds, as the fish has cat like reflexes.

The amount of fresh food required daily for each fish will depend on its size. On average, the lionfish can expand its stomach can be filled to more than 30 times the normal size of the fish. That means quite a bit of wildlife can be consumed by the natural swimmer in the ocean.

Because of their invasive nature, more aggressive steps are being taken to remove this species from certain areas of the ocean. The result is an abundance of fish that are consumed in some areas. However, like other fish with toxins, they have to be specially prepared to be safe for humans.

back to the top of lionfish page

to a recent article concerning lion fish in deep seas