Swimming in a Fountain of Youth

Can Swimming be The Fountain of Youth? We all know that swimming is one of the best forms of exercise. But did you also know that as a natural swimmer, providing you swim both regularly and with plenty of zeal, swimming can help to keep you feeling and looking younger? Well, according to research recently carried out at Indiana University Bloomington's (IUB) Councilman Center for the Science of Swimming, that’s exactly what they’ve found.

The new research into the subject of “optimal aging” has been carried out using slightly different parameters to the norm. Whereas previous research into aging has focused on what was considered to be a general sample of the aging population, (a sample including individuals carrying disease and other age-related conditions), the new research has been carried out on a more physically active sample of the senior population.

Being a Natural Swimmer Can Promote Anti Aging Circumstances

The results show quite conclusively that being a natural swimmer, especially one who has swum competitively, does seem to promote an anti aging phenomenon. 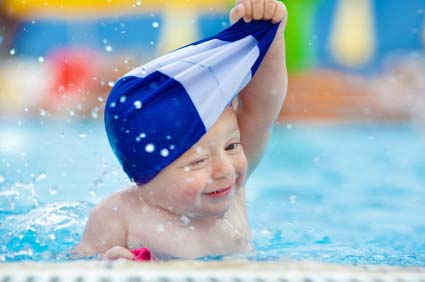 The tests carried out by the IUB’s research team were enacted on an elite band of swimmers. Each one was a natural swimmer who was entered into either the 2004 US championships, and/or the 2006 FINA world Championships that were held in Stanford. The research looked at what are called “age markers” which normally decline by between 0.5% and 1% per annum starting on or around the age of 35. The data recorded from this elite group of athletes was then compared to similar data from that of the general public.

Age markers include such things as blood pressure, the blood itself, muscle tone, telomere length and heart function. Amongst the natural swimmers from the elite group, who admittedly subjected themselves to intensive swimming as part of their competitive training, the deterioration in all of the age markers mentioned was substantially lower than that seen in the general public.

Joel Stager, director of the IUB Councilman Center’s Science of Swimming is reported as stating that much of the decline in age markers is due to a reduction in activity, rather than the advancing of age, as such. This suggests that regular physical activity serves to extend physiological ability.

This new research suggests that younger, fitter people can stave off some of the symptoms of aging with intense physical activity. So a natural swimmer who is able to swim 3500 to 5000 meters 2 or 3 times per week will reap the benefits, but what about those people who are already approaching their senior years?

Swimming is Still the Best Fountain of Youth for the Elderly

Even though it may be too late for many senior persons to be able to take advantage of the anti aging circumstances that regular intense sessions of swimming can bring about, indulging in a program of light swimming, pool or open water, is still beneficial. Because it’s a low impact activity it is kinder to aged joints. Not only that, but it helps increase mobility in those joints too, so being a natural swimmer is an excellent antidote for conditions like arthritis.

Total:  4500 meters or yards depending on pool length

back to the top of fountain of youth page