The Swimmers body and build is evident in all nationalities and genders.  They all have certain physical characteristics that make them adept for the sport. Natural swimmer types have the same muscle group reflexes that help them to move through the water swiftly. One characteristic that all swimmers have in common is large shoulders developed by using their arms to propel them through the water. Physical fitness is one of the keys to speed and endurance for developing a competitive swimmers body. The keys to effective swimming are to use techniques to move quickly and reduce resistance from the movement of the water against the body’s surface area.

The Most Natural Swimmer
Michael Phelps

One of the best examples of a person who has a natural swimmer attributes is Michael Phelps. He has long arms, flexible elbows and large feet which allow him to move through the water quickly. Swimmers have well developed square shaped shoulders that allow for more efficient movement during the swimming stroke, this allows for quicker movement in the water. There are studies that show the length of the extremities and fingers can predict athletic ability for different sports, with the length of the ring finger being a key characteristic. 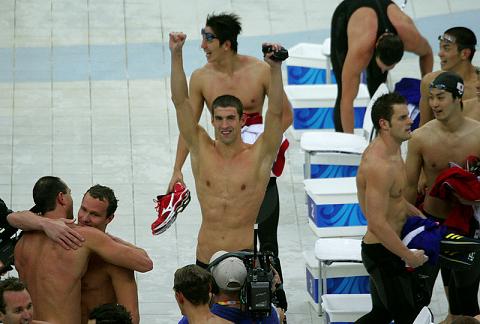 Dara Torres is best known for her amazing five time Olympian events, she was the first United States woman swimmer to compete in all five games; this is an amazing event when you consider the Olympics are held four years apart. She first competed at age 14 and has won over twelve medals in major events such as the Olympics and holds the United States record in the 50 meter freestyle.  Dara has the most incredible swimmer abs ever.  For a picture of these fine looking stomach muscles, click here.

Janet Evans is considered to have a unique windmill type of stroke when swimming. Her body dynamics are different because she is short and does not have the same physiological natural swimmer body type as other professional swimmers. What does set her apart, however is her ability to combine her technique with impressive cardio respiratory reserves that allow her to withstand swimming longer and to better effect than other swimmers. In addition to her world records she was named Female World Swimmer of the Year in 1987, 1989 and 1990.

Natalie Coughlin is best known for her impressive completing of the 100 meter backstroke course in under one minute. She has won the back to back consecutive 100 meter backstroke course gold medals at the Olympics. She first started to swim as a very young child and has shown herself to be a natural swimmer since that time. Her totals include twenty one gold, seventeen silver and ten bronze medals combined during her competitions spanning World, Pan Pacific and Olympic events.

Considering these athletes and their impressive records it is evident that the swimmers body and natural swimmer are part of what gives them the ability to be the best at their individual events. These abilities, muscular and bone structure allow them to perform at high levels in swimming.

back to the top of swimmers body page